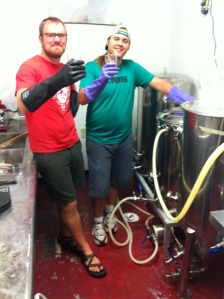 Making beer can be fun, as evidenced by the turnkey system above. Simply grab a frosty beverage with your big brewers gloves, press a button or two, and voila!

As Brewmaster J and Adam can attest, our rickety old pirate ship is a bit more labor intensive than that.

Let me introduce Adam, the Professor, a frequent traveler to Belgium. He has tasted some of the best beers in the world: Westvleteren, Rochefort, not to mention hundreds of others. He has a great understanding of the process, and his help made brew-day exponentially more fun. 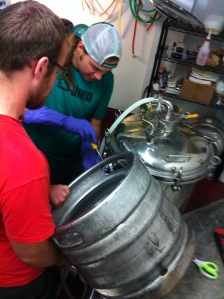 The tiny Papa Louie’s brew-house was bursting at the seams when the three of us attacked this new project.

J arrived early, brew-key in hand. Milling grain, re-cleaning the brew kettle, heating/treating the hot liquor, and re-assembling the jigsaw puzzle of a pump were some of the small tasks the were knocked out before the rest of us stragglers had our first coffee.

An amazingly simple grain bill was constructed: Briess Pale, crystal wheat, Gambrinus honey malt, and a pinch of crystal. The simplicity lies in the Pale malt, which makes up about 90% of this beer.

Some famous British pale ales, such as Fuller’s, are constructed using 100% pale barley malt. The brewery execution can shine brightly in such a simple grain bill, although some imbibers would prefer more complexity. For commercial examples, check out Empyrean Nitro Red, the Union series from Summit, or the original single malt beer: Pilsner Urquell. The later is a lager, but the fresh bread aroma is a definitive characteristic of the style, and this aroma is a product of the Pilsner (Moravian) barley malt.

In contrast with Pilsner malt, Pale malts contribute a slightly nutty, toasty flavor. These flavors are subdued, restrained. Easily overshadowed by flaws, or a last minute decision to throw a Nutter Butter sandwich cookie into the boiling wort (no judgement). 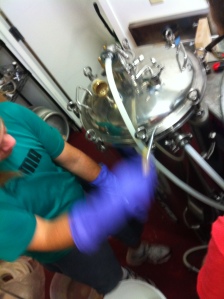 The grand majesty of hoppiness herself, Citra, will play a big part in this brew. Whole Citra hops will be added directly into the firkin at packaging, imparting tropical aromas of mango and papaya. 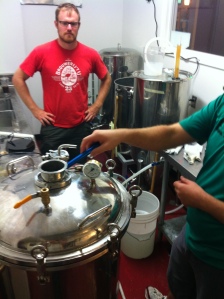 As we prepared the tax determination vessel, our imaginations turned to the perfect lawnmower beer: dry, fruity, light-bodied, and sessionable (sessionable is the new drinkability).

The next time your friend reaches for that vortex bottle with the neon blue mountains, the one named after that other famous brewing town from Czech, you can treat yourself to a quaffable lemon/lime lawnmower, hopefully available in a few weeks. 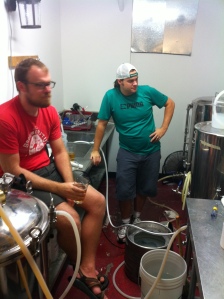 Our imaginations were quickly turned back to realty as the wives/girlfriends made Sunday plans. Drinking our final beer, the deliciously sessionable Boulevard Pop-up IPA, we concocted a mad scientist plan to cut our chill time in half, thus freeing us for domestic duties sooner.